​Decks with a Michigan
​Theme & Connection

little bay boards - petoskey, mi (2021):
known for making one of a kind world class hollow core wood paddle boards, LBB also designs, strips, inlays, and  transforms existing snowboard top sheets into works of art. whatever you can imagine they can create  into rideable art. look them up to transform any snow/water/skate deck surface and design you desire.
Donated By Jason thelan of LTBB, board made by trevor reese, mackinac bridge Painting by Mary Bea - all out of their Petoskey, mi workshop..
* * *
​
​SAUNZEE (1983):
​Saunzee began making snowboards in Holland, MI in the early 80’s. All boards were handmade in a time consuming process by layering fiberglass over a balsa wood core. They even had their own binding made out of molded fiberglass. Perhaps the most interesting aspect was that each board had a unique hand painted design making them as much about art as sport.  Although Saunzee got out of snowboards by the mid 1980’s, the company remains in operation under the same family name in Spring Lake, MI as a manufacturer of custom made signs, displays, and fixtures for exhibits. For further information google “saunzee history” to see images of their historical snowboards, skateboards and surfboards.

​
​JOYRIDE - Edmund Fitzgerald (1994)
Joyride had a stint during the 1990’s of naming their snowboards after a common theme. This particular year featured names of shipwrecks. The mermaid base depicted the sending of stars upwards towards the surface of Lake Superior, possibly representing the lakes reluctant release of the 29 lost men who went down on November 10, 1975 just 17 miles northwest of Whitefish Point, MI.

​
* * *
​
​
​CENTURY MACHINE - Unamed Board (1995)
​These boards were made by Century Tool & Die in Flint, MI. It’s a prime example of a typical industrial manufacturer putting idle press time to use in an attempt to diversify away from Michigan’s cyclical automotive parts business. these boards came about when Back in the 90's the company owner offered up a deal... if 10 boards were sold 1 board was given as comission. 10 boards later this board was the first in the quiver marking a transition from one plank to two.

​
* * *
​
​
Static Snowboard Co  - 1955 Cadillac (1990's)
Static was a subsidiary started by Variflex in Huntington Beach, CA in 1995. This decks graphics are the connection to Michigan and symbolized the Detroit, MI automotive heydays in the 1950's. Although the plant is no longer around, this board memorializes the vehicle that was made there.

​​
* * *
​
​
Burton - Custom (2003)
Aaron James Draplin. Graphic Designer and founder DDC (Draplin Design Company). Born in Detroit, MI; Raised in Central Lake, MI; Schooled in Traverse City, MI. Aaron is an old Michigan snowboarder trained at Minneapolis College of Art & Design who resids in Bend, OR. Aaron's mind is responsible for many iconic snowboarding related brand logos... Union Binding, Cobra Dogs, Drink Water, Grenade, Asymbol, COAL, High Cascade Snowboard Camp, Timberline Lodge, and numerous snowboard graphics including this first project he did for Burton - the 2003 Burton Custom 147 shown above on the printed page and in the collection. If that's not enough impact on the spors culture, Aaron was also the Creative Director at Snowboarder Magazine when things took off. Of special design note is the base graphic, and the 3D Hologram embedded in the boards top sheet that changes color from green to red depending on viewing angle.

​
* * *
​
​
stephens manufacturing, bridgman, mi - FUN SKI  (1970)
LIKE OTHERS BEFORE AND AFTER, THE OWNER OF THIS BRIDGMAN, MI COMPANY WAS MOST LIKELY INSPIRED TO CREATE THIS DUAL DECK DUE TO THE GENEROUS AMOUNTS OF LAKE EFFECT SNOW THAT COVERED NEARBY WARREN DUNES STATE PARK on lake michgan (south western michigan). ITS 47" LENGTH and 12" WIDE BEAM MADE FOR A STABLE PLATFORM WHERE ONE COULD PLACE either foot forward (goofy or regular). A FOLDING STEEL HANDLE (INSTEAD OF THE SNURFER TYPE ROPE), TRACTION MATS, AND METAL RUNNERS WERE COMMoN PERFORMANCE FEATURES OF EARLY ERA "SNOW TYPE BOARDS". WHAT SETS IT APART IS THE DUAL PIVOTING DECK AND THEREFORE THE ABILITY TO ALSO DIRECT THE BOARD WITH HANDS, PROVIDING FOR A MEASURE OF LATERAL STABILITY RATHER THAN TOTAL BODY LEAN. THIS MODEL IS INCLUDED IN THE COLLECTION BECAUSE IT WAS ADVERTISED FOR "SNOW SURFING". OTHER VERSIONS USING THE SAME PLATFORM INCLUDED A JUNIOR FUN SKI, SEATED FUN SKI, AND BIKE FUN SKI ATTACHMENT. IT COULD BE PURCHASED BY CUTTING OUT THE ADVERTISEMENT (IN BOY'S LIFE MAGAZINE) AND MAIL ORDERING A PERSONAL CHECK, MONEY ORDER, OR 50% CASH DEPOSIT WITH 50% COD FOR $29.95

​
* * *
​
​
BURTON - Backhill (1983)
Although this boards manufacturing run was shaped by "AJ" [Andy (Coughlan) & Jake (burton carpenter)], Bob Novak, from Muskegon, MI and an early Burton employee, shaped these exact boards along side them and many are adorned with a "Bob Novak" signature UPON THE FINAL FINISHING PROCESS. The practice was for the shaper to sign off on all boards they made as a mark of craftsmanship (and possibly as a quality control measure of responsibility should a board ever be returned defective).  Bob resides on the west side of the Michigan as owner of NOVAK Snurfboards, LLC. The super rare middle board is called the Black Widow (not in the collection) and shows an example of Bob's signature.

* * *
​
​
​BOB NOVAK STARTED NOVAK SNURFBOARDS IN 2007. HE STARTED ON A BRUNSWICK SNURFER AT THE AGE OF 7 MAKING HIS VERY FIRST RUN AT LAKE HARBOR DUNE PARK, NORTON SHORES, MI. HE CONTINUED TO HONE HIS SKILLS, ULTIMATELY WINNING "5" NATIONAL CHAMPIONSHIPS. HE FIRST MET JAKE BURTON AT THE 1979 BLOCKHOUSE HILL SNURF EVENT. THIS LED TO BEING ON THE VERY FIRST BURTON PRO TEAM along with KEVIN WORKMAN (MUSKEGoN, MI), JIM TRIM, BILL & TOM pUSHOW. HE THEN MOVED TO VERMONT FOR SEVERAL YEARS AND WORKED AS A BOARD SHAPER FOR BURTON WHILE CONTINUING TO RIDE. IN SHORT, BOB WAS ONE OF the FEW WHO LIVED EARLY SNOWBOaRD HISTORY dURING THE period IT WAS BEING DEFINED from snurfer to snowboard.
​
* * *
​
​
morgan lafonte's (boyne falls, mi) first pro model. sponsored and made by k2 snowboards 199?
​* * *

Signal - disruptor (2017/2018)
​kyle mack's (west bloomfield, MI) first pro board. the all "around park board" design that kyle strapped on to win a silver medal in big air at the olympics in pyeongChang, south korea.
(courtesy Al king - charlevoix, mi)
* * *
​

aggression snowboard company - TR60 (1992)
matt nipper, a native of ann arbor michigan, got a snurfer from meijers thrifty acers one christmas in the late 1970's and began riding with the attitude "whoever got down the hill first won". he then modified it in huron high school shop class, rode it in the backyard, the "arb", inglis mansion, and anywhere with a slope near a2, as well as snowbowl near houghton lake. he eventually began modifying boards locally, bought a sims 1981 ski board, and a few years later was in tom sims santa barbara, ca office reviewing new designs. he eventually ended up in the mountains of colorado and founded aggression snowboard co. this board was designed by matt and pro rider tarquin robbins (tarquin's 2ed pro model). the board was made on December 3, 1992. aggression became a big brand in the snowboard world and matt later sold Aggression to Volant ski co. matt lived through, contributed, and was a key part of the snurfer to snowbaord historical transition - not many can say that.
​
​* * *

gordo snowbaords (dub?) - kalamazoo, mi
​scott gordon launched dub snowboards from his parents house in kalamazoo, mi 1992(?). we believe they were made in the old gibson guitar plant in kalamazoo. early employees were ross wordhouse (graphics) and julian ritchie (manufacturing). board nases included images of "mr. clean, "fat albert", and the "general lee". we've uncovered the image of a top sheet graphic pictued (comming soon).
​*still looking to track down scott, an old gordo board, and more history.

​​* * *
​
Marhar - First Year (2009): *ISO*  grand rapids, mi
True to its Western Michigan roots near where the Snurfer was born, Marhar Snowboards out of Grandville, MI is a relatively new manufacturer that is pushing the limits on the use of materials. Their “Archaic” won best-in-show at SIA in 200?. Founders Nathan Morse and Josh Skiles keep releasing cool product every year that has kept Marhar relevant and along with their solid reputation, the duo keeps moving more boards downhill.
​
​
* * *
​
​
Antix Board Co. (200?) *ISO*
The current iteration of the Antix Collective is a colabaration between designer Marc Moline in Grand Rapids, MI  and the board press operation at Shaggy's Copper Country Skis in Boyne City, MI.  One board design named the "Hoffmaster" pays tribute to the sand dunes at P.J. Hoffmaster State Park near the home of Sherman Poppen and where many a Snurfer were pointed downhill.

* * *
​
epix snowboards (2002-2013) holly, mi
epix started in holly, mi (near mt. holly) and later moved to ortonville, mi. they may be most known for pressing boards for a handful of michigan based companies to promote their brands. michigan based brands they created decks for included ford, mcclures pickles, a faygo soda concept board, and an american coney island board (with plans for a lafayette coney island board that was never made). they also sold soft goods  such as shirts, hats, sox, etc. under the epix name. the epix ford board was produced as a 2ed place trophy for the ford campus rail jam series. The messenger bag with same graphics was 3rd place. Cash went to the winner. this series took place at northern colleges around the country. the rail jams used an ice runway scraped from local rink surfaces by a zamboni machine. the artwork for these decks and soft goods was created by gustov gerlach of detroit.

syrup tree board co. (2017) marquette, mi
syrup tree board co. originated in Marquette, mi by gavin nator. hand made in small batch with great care, the boards are solid and substantial through and through. the traction mats are hard core and feel indestructible. if you are looking for something different, made u.p. tough, check them out and take a test ride with gavin himself who splits time between upper and lower michigan.

​* * *
​
huron collective (2016-2019) muskeegon, mi
​huron collective was started by three michigan buddies as a side gig for fun and charity. they were chad ? and ?, and ?. they did the outstanding design work. the deck pressing itslef being sourced in china. they ended up making 30-35 boards, and after trial runs and prototyping, 14 of which became saleable, in four different design graphics. they chose the name huron which translated to "having hair standing in bristles" from the old french "hure-head of a wild boar"
* * *
​
Lenderink Wood Blank (1980's) *ISO*
​Lenderink is a Western, MI supplier of wood products. They supplied the wood core blanks that several snowboard manufacturers used in making their finished snowboards.
​

​* * *
​
​
echelon snowboards -
echelon is a michigan based company that designs their boards in michigan. they originally began manufacturing their decks overseas, but then on-shored manufacturing to michigan in 2014. we hope to have more info on echelon soon.

michigan technological university (est 1885) - enterprise program, boardsport technologies
michigan tech's engineering department has a unique enterprise program where students of any major can elect to work on project teams to pioneer solutions for real world clients. there are 24 enterprise teams, one of which is boardsport technologies (BST). bst focuses on the engineering, design, and manufacturing of decks related to the board sports industry. they strive to produce new, refined, and attractive boards by making them lighter and stronger using innovative materials. these prototype boards were made by the 2020 team and donated to the museum.
(thank you dr. Ibrahim miskioglu and Prof rick berkey, and the student team that made these decks) 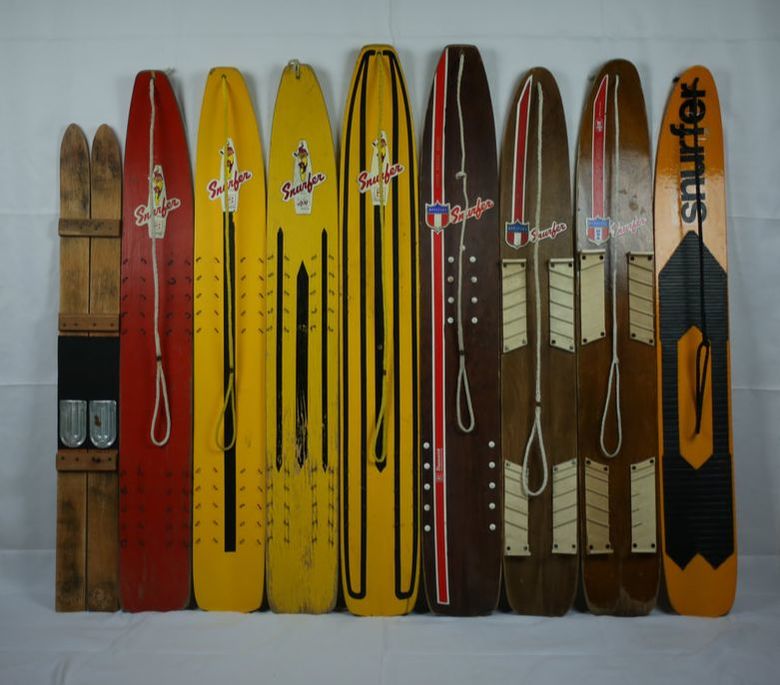