1965: sherman poppen invents the snurfer by fixing two skis together in his garage on christmas day.

1966: sherman obtains a patent for the snurfer and licences it to brunswick corp, making it the first commercially available snow surfer, exposing millions to a new category of winter sport.

19??: jem corp obtains the licence from brunswick and continues to manufacture the snurfer.

​
* * *
​
​
Snurfer: made by jem corp (redesign) - 1980
This is a SOMEWHAT hard to find Snurfer. We believe it was made near the end of the snurfer craze and therefore not as prevalent in volume as other models. The BIG font SMALL letters are more mid-century than classic. The traction mat deviated from the original staples and plastic Foot pad, and more along the same lines as the early Burton backyards and other makers board mats.

​
This Snurfer was designed and manufactured by the legendary paul graves. if you don't know his contributions to the sport look them up. this may be the most capable big hill powder deck of any prior snurfer branded board - due t it's width, dual bungee binding, camber, and thin lightweight design. it's also the first to go "ropeless". the business idea never fully materialized thus very few of these were ever produced. tHE MUSEUM PURCHASED IT DIRECTLY FROM PAUL AND HIS HAND SIGNATURE APPEARS IN THE TOP BLUE TRIANGLE. it's never been ridden and remains in museum quality condition. 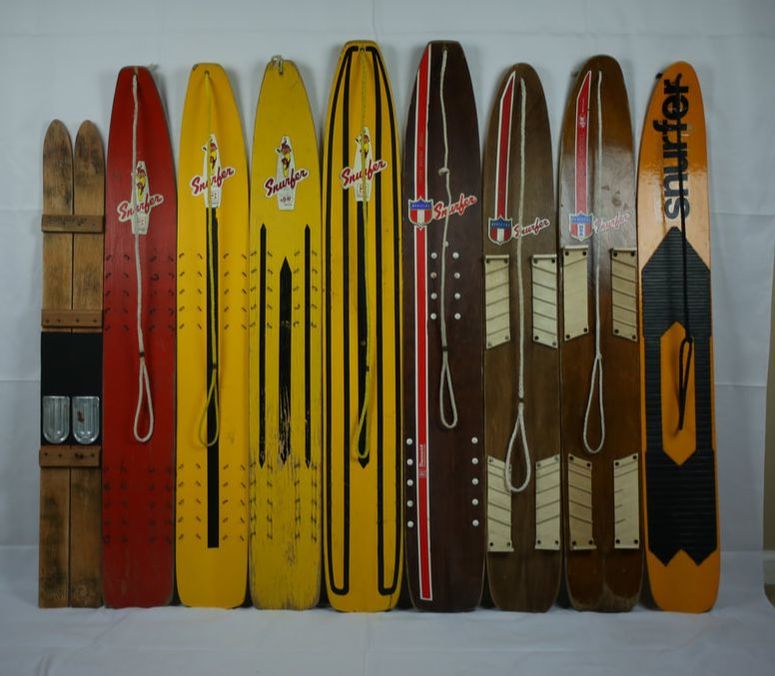