* * *
​
​
​​Burton Boot (1987)
​This is one of the early boot entries from Burton. It reminds many of the typical Sorel winter boot of the era. In fact, the outer shell was contracted out by Burton and manufactured by Sorel. The inner is somewhat like inners today with an initial lace up system, followed by a traditional outer lace. The inner remains fixed in the boot however. The iconic 80’s Burton Mountain logo on leather enhances the look. Of special note is the boot based leash to arrest a board after a fall.

​
* * *
​
​
​Burton Binding (1987)
​This “cast” like high-back binding replaced the original soft rubber no-back bootie found on the early 80’s boards and the two-piece flexible strap binding of the mid 80’s. It was Burton’s first one-piece injection molded “cast” binding. The inserts on the board itself allowed it to be mounted in only two positions, 90 degrees and 120 degrees. Most mountings were 90 back foot, 120 front. Adjustable Fastex pinch buckles completed the binding and allowed for tightening to the boot. many of these bindings are no longer around as the plastic becomes brittle over time and cracks.

​
* * *
​
​
Burton Leash (1980/1990)
In order to be allowed on a “ski” hill and in the tradition of skiing at the time (pre-ski brakes), a snowboard leash was required to arrest run away snowboards in the days of rubber boot bindings. Even after board-binding-boot systems became fixed, leashes still lingered and were required by resorts. As we now know, the falsehood with this thinking is obvious (skies are designed to come off after a fall, snowboards are not). For this reason resorts have not mandated leashes on snowboards for years now. Although unbuckling a snowboard binding makes it susceptible to “run-away”, 99% of the time boards only come off intentionally.

​
* * *
​
​
Burton traction/stomp pads (1980's)
The use of large integrated traction pads under rubber bindings & straps of the early 80's; to the continued use of large split pads underneath hard bindings in the mid 80's; to a much smaller pad applied only between bindings by the late 80's, evolved to it's current extent during this decade. it's remained basically the same ever since. the sole purpose being to help hold the unbound boot to the board when exiting the lift chair... or in the case of modern park tricks where a rider purposely maneuvers with one foot completely out of the binding, with the pad providing traction upon landing.

​
* * *
​
​
Burton Jacket (late 1980's)
Color coordinated with the Burton hat above, this "Surfwear" line of outerwear made in the US & Europe featured the Burton block logo that later appeared on many snowboard topsheets in the early 1990's. The name Surfwear itself exemplified surfing's influence on snowboarding.  The somewhat subdued colors of this pullover was a sign of the transition between earlier solid reds and blacks from Burton, to the brighter neon colors that were appearing at the time. This designs uniqueness lies in the across the chest "Star Trek" zipper panel.

​
burton pant (late 80's)
see above jacket description.
​* * *​
​
Burton Glove (late 1980's)
​These well worn gloves were from the era of racing and carving. the built in kevlar material added protection when laying down a carve and knuckle dragging on the hard pack.
* * *
​

US OPEN burton team sweatshirt (1980's)
from an era when the US open was held on the east coast prior to its current location in vail, co. stratten was the birthplace of resort snowboarding. it was near jake's manufacturing barn & shop in the londonderry area of southern vermont before he moved operations to burlington in northern, vt. jake tested boards on the run "sundowner" at stratten after closing hours, before the resort actually allowed snowboarders on the hill. the graphics image is of michigan 80's burton pro todd van belkum.
(courtesy craig gietzen, rockford, MI)

Burton Snowboard Bag (1985)
This style snowboard bag made it's appearance prior to snowboarding's mainstream acceptance at lift serviced ski resorts.  Part of The reason for it's built in backpack straps allowed one to snowshoe or post hole your way up and into the backcountry to make hard earned runs. Secondarily, the bags designed rise in the binding area accommodated the non-fold down once piece binding (see cast type binding above). 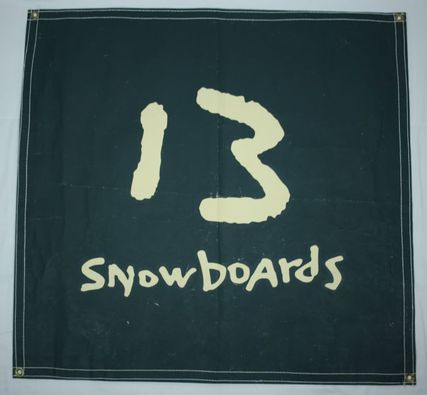 Burton Dealer Display Wall Poster (199?)
Perhaps one of the most creative symbols imagined by the Burton logo team, the Burton “B” mimicked the number “13” when separated, and signified the rebellious nature of snowboarding.
*Gifted by J. Garris
​

* * *
​
​
Burton Products Catalog (1985)
This catalog exhibits several of the boards & accessories in the MSM collection. Burtons rapid development at this point was somewhat attributed to it's easy access to test in Vermont under all conditions. This was viewed as an advantage over west coast and rocky mountain brands where one rode in softer conditions more frequently. Newer board features included a fiberglass foam core model, scratch resistant top skin, rubberized tail protector, and mention that the steel side fins could be removed in many snow conditions. One funny note in Jake's intro letter states "the future of ski area riding hinges upon the good behavior and willingness of snowboarders to comply with ski area regulations", and that "snowboards can be ridden on some ski area slopes in hard snow conditions without interrupting skier traffic". Also mentioned was that "entry into snowboarding as either a beginner or intermediate was somewhat based on ones previous experience as skateboarder, surfer, wind surfer, and even skier"!  Burton's marketing strategy of the era focused on attempting to expand product line beyond snowboards themselves. In doing so they introduced items such as the One Piece Riding Suite, Vermont Wooley Pants, and "high top bindings made to accommodate everything from high sneakers to snowmobile boots" (because that's the footware many people snowboarded in then). Old snowboard catalogs themselves have their own niche of collectors.
​*Thanks S. McCabe.
​
​* * *
​
​
Burton Informational Mailer & Poster (1984)
The text on the backside of this small poster/informational handout is still attempting to sell snowboarding as legit. It compares snowboarding to the "high" feeling of "surfing" on snow. The emphasis remained on back country and backyard slopes, with secondary mention that more resorts are allowing snowboarding.  At this point Burton boards are individually hand shaped in the green mountains of Vermont. Boards still came with a "power cord", the Competition Performer model came out with a Ptex base (as opposed to wood), and steel edges were "special order". Burton headquarters were located in Manchester Center, VT at this time. 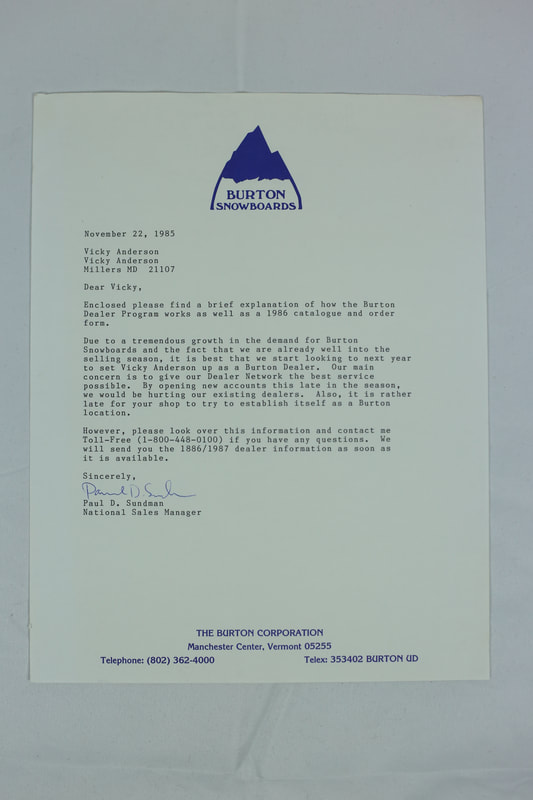 Burton Dealer Program Introduction Letter (1985)
A cover letter to an inquiry about becoming a Dealer from Burton's National Sales Manager in 1985. It provides a bit of insight into how Burton carefully cultivated potential new dealers, as well as protecting their existing dealer network.

​
* * *
​
​
Burton Prospective Dealer Letter (1985)
This cover letter to prospective dealers bullet points how the dealer program worked. It explains requirements & recommendations,  promotional & point-of-sale (POS)  items, and provides indications on the size of Burton's customer/inquiry base. It also contains insights into Burton's advertising avenues in the mid 80's targeting all board sports, action sports, and even Rolling Stone magazine. It further nudges dealers to consider Burton branded accessories, boots and clothing. Finally, it touts Burton's dominant market share of a sport on the verge of becoming a mainstream winter activity (as opposed to a fringe activity).
*Letter Signed by Michigan Native, Burton Team Rider, Burton Dealer Sales Manager, Todd Van Belkum, Grand Rapids, MI.
​
​* * *
​
​
Burton Dealer Wholesale Order Form (1985)
This order form beckons back to the days of carbon paper! Burton kept the original white copy,  the Rep kept the yellow, and the dealer kept the pink. Our favorite product description on the form is the Burton "riding shoe". As you can see there was quite a line up of products other than snowboards at this point, something that Burton continues to expand on to this day either through products related to outdoor activities in general, or collaborations with other global brands not directly related to on-hill products.